Steve Duncan is a funny man and a great speaker. He’s also a protector of wildlife and an advocate for aviculturists. And he’s President of the Avicultural Society of America. http://asabirds.org/ North County Aviculturists were lucky to have Steve back again for our May general meeting. Even when he’s being serious, he’s entertaining.

We learned that Steve has been involved with the International Crane Foundation for many years. https://www.savingcranes.org/ Quick quizz, how many species of cranes are there in the world? The answer will be at the end of this blog. They can be found all over the world, except the arctic circles and South America.

There are only a few species of cranes that are not endangered or threatened. They need swampy wetlands to thrive, and most of those types of land are being drained and used for agriculture or other human needs. That’s where the Sauey Horse Farm came in. In 1973, Ron Sauey and George Archibald took part of the family horse farm near Baraboo, Wisconsin, and developed habitats there for captive breeding of cranes. They also made efforts to protect wetlands and support conservation efforts.

Over the years, with help from grants and memberships in the foundation, the ICF has managed to hatch every type of crane that exists. The staff go through amazing steps to keep the birds healthy, to provide artificial insemination, and to prevent the chicks from imprinting on people. Let me tell you, I will never forget the video showing the process of artificial insemination in cranes. No matter how hard I try. 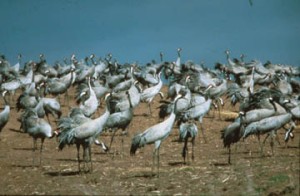 The facility in Baraboo is beautifully set up. Visitors can get a clear view of the pair of cranes in each enclosure. The pairs are young cranes that will eventually be moved into the breeding facility, and will have many years of laying eggs, incubating eggs, and raising chicks.

Of course, the staff often collect the eggs and put them in incubators so that the mated pair will lay more. One of the contributing factors to the decline of cranes is the slow reproduction rate, usually only one or two eggs and only once a year. As I mentioned, the caretakers wear elaborate crane outfits so that the chicks don’t imprint on humans. And they are taught to fly with a light flyer, just like in that movie about the Canada geese. The neat thing is that the chicks only need to be shown the way down to the winter grounds once. They can get back and keep going there on their own from then on.

That applies to the cranes that are found in the United States, there are other release and train plans in effect for the Eurasian and African cranes. The Siberian crane has to make the flight south over Mount Everest every year. And back again.

If you are asking yourself why I stated that cranes are important, it’s because they are Megafauna! Like elephants and such, the health of the crane population directly impacts the health of many other wildlife creatures, as well as their habitats. And they are charismatic, beautiful birds that are easy to see, in which the public would want to invest time and money for their survival.

As I said, Steve Duncan is president of ASA. This organization throws the best conventions every year. Last March they were here in San Diego, and convention goers got behind the scenes tours of Sea Worls, especially the penguin exhibit. In 2016, the convention will be in Port Angeles, Washington. And the zoological operation involved will be the Dry Creek Waterfowl Refuge, run by Arnold and Debbie Schouten. http://www.peninsuladailynews.com/article/20130331/NEWS/303319987If you are in that area and want to have a wonderful weekend with other bird people, get your membership in ASA so you will get the earliest information on purchasing convention memberships.

Thanks for reading, I’ll be back on Thursday.

A writer at the Edge of the Universe. View all posts by windr0se

This site uses Akismet to reduce spam. Learn how your comment data is processed.