On Sunday, I wrote about the African Grey parrots, or CAGs, that live in my house and the advent of a baby CAG to be handfed. After promising Bobo that the baby would only stay for one week, I had to apologize when Digger got to stay for a few more weeks.

Digger exhibited behavior at his other house that showed a high level of fear and anxiety, and he was only 8 weeks old. When his care giver bumped his brooder box, he would start to growl and scream. He would continue to carry on until she picked him up and rocked him. Once he was back in the brooder, if anything in the room changed, he would start up again.

So when I offered to continue his weaning at my place, the caregiver was only too happy to let me. She picked up her other baby birds, and I continued to work with Digger. I moved him from his brooder box into a cage. He could now see all around him, so he stayed calmer. Also I was sitting next to him periodically throughout the day. I would reach into the cage, and let him mouth my fingers. He was such a gentle little guy. 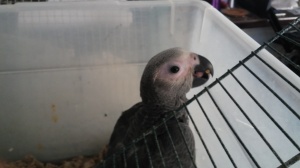 I had the joy of watching him learn to climb and perch. It can be entertaining to see a baby CAG hanging upside down on a perch, looking confused, because the perch is only a few inches off the bottom of the cage. He couldn’t get his wings out far enough to do him any good. I was tempted to reach into the cage and help, but he figured it out quickly.

Digger loved to chew on things. I gave him lots of plastic chains, wood pegs, cardboard tubes, and even the tops from drink bottles. He soon developed a habit of keeping his toys in one place, and pooping in another, under the highest perch. In a matter of four or five days, he went from struggling on the lowest perch to mastering the top one.

On top of his cage, I placed a playground stand, and let him have time every day totally out of the cage. Soon I could just open the cage door, and he could climb up to the play stand. But his favorite thing was to be with me, on my arm or shoulder. So if I left the room while he was out, he would hurl himself off and come look for me. He managed to not get killed when Bobo was out and charged him. But he started climbing up on Maynard’s cage. Maynard was ready rip the baby apart, no matter how often I asked that he not.

In the third week that Digger was here, he learned to fly. He had been eating less and less hand feeding formula. He did eat some of the Tropimix by Hagen but he had very specific ideas on what was edible and what was not. He disliked the big raisins and dates in the mix. His weight dropped a bit, and one day he flew from the play stand into the living room.

So we took him and other birds who needed a trim, to the nearest bird store. Digger behaved like the sweet thing he is, and let them trim his wings. His nails were a bit more difficult for him. Like most baby parrots, his toe nails were thin and sharp. If parrots could be trained for acupuncture, someone could make a lot of cash. The weather was too hot for me to wear long sleeves, so Digger’s nails had to go.

I half expected a return of the anxiety behavior after that experience. But he took it all in stride. He still flapped his wings, as if willing the feathers to come back. And he just took a little more time to climb things. I have since learned that CAGs have a good does of fear of heights, or rather, fear of falling. That made a lot of sense based on how careful Digger became.

With his original caregiver’s permission, I took Digger along to a support group meeting that I go to every week. He was the star of the evening. People are encouraged to bring pets, and dogs have been welcome many times. I brought several birds myself, including Maynard. But this sweet little Grey had the crowd at his feet. He was good enough to pose for a few photos, but he was happiest when it was time to pack up and go home.

I knew the hardest day was coming, when I would have to bring him back so he could go to his forever home, to the man who had already paid a deposit on this parrot. And I will finish the story on Sunday, with some special information on Therapy Animals. Thanks for reading!

A writer at the Edge of the Universe. View all posts by windr0se

This site uses Akismet to reduce spam. Learn how your comment data is processed.